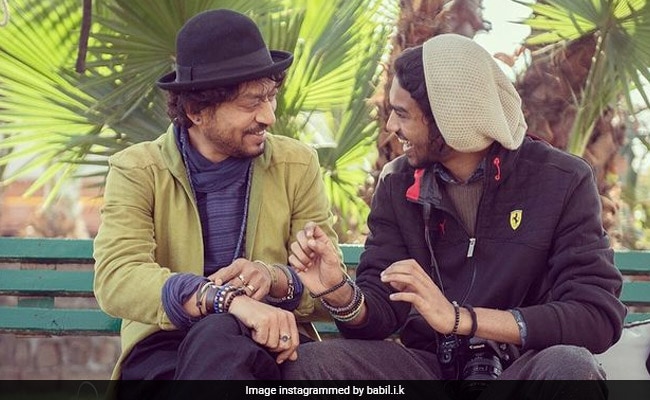 Actor Ayushmann Khurrana first met actor Irrfan Khan’s son Babil Khan at the 66th Filmfare Award ceremony on Saturday evening. Ayushmann presented the trophies won by Irrfan Khan to his son Babil who had arrived at the ceremony to receive his father’s prizes. Irrfan Khan received two awards including one posthumously for Best Actor for his work in the film Angrezi medium and a Lifetime Achievement Award. Celebrating Irrfan’s “double win” and expressing his enthusiasm after meeting Babil for the first time, Ayushmann Khurrana dedicated an Instagram post to Irrfan. In the caption of the post, he praised the late actor as he wrote: “It’s somewhere in Bandra. But he’s resting somewhere in peace. Celebrating his double victory. Forever Irfan! Best Actor (Male ) and his lifetime achievement award! I had the honor to present this Filmfare award to Babil Khan. I met this handsome boy for the first time. I would see him do well in the future. We the artists, are a unique species. We have our vulnerabilities, our imaginations and our theories. We rely on observations and experiences, we live and die a thousand deaths on celluloid or on stage, but the power of these performances makes us immortal. Kalaakaaro Ka Kabhi Ateet nahi hota, kabhi vartmaan nahi hota. Jab bhi koi kalaakar jaata hai uska est tarah se samman nahi hota, kyuki har koi fankaar Irrfan nahi hota.“

In addition to the long note, Ayushmann shared a photo of Irrfan Khan’s graffiti from one of the walls in Bandra. The post received a lot of love from Ayushmann Khurrana and Irrfan Khan fans. Besides fans, most celebrities including Manvi Gagroo, Sayani Gupta, Siddhant Chaturvedi, and many more have dropped heart emojis in the comments section of the post.

Alternatively, Irrfan Khan’s son Babil Khan also named Ayushmann Khurrana as one of his “favorite people in the world”, in his latest Instagram post. Babil shared a photo of himself with actor Jaideep Ahlawat from the Filmfare Award feature red carpet and wrote: “My favorite people in the world: Jaideep Ahlawat, Vijay Varma, Pankaj Tripathi, Ayushmann Khurrana, Bhupendra Jadawat, Karnesh and Tripti Dimri, not in that order (outside of the family of course). “

Angrezi medium was Irrfan Khan’s last film. Director Homi Adajania was scheduled to hit theaters on March 13 last year, but has not been released due to the coronavirus outbreak and subsequent lockdown. It was later released on the OTT Disney Plus Hotstar platform. Irrfan Khan died at the age of 53 on April 29 last year after a long battle with cancer.