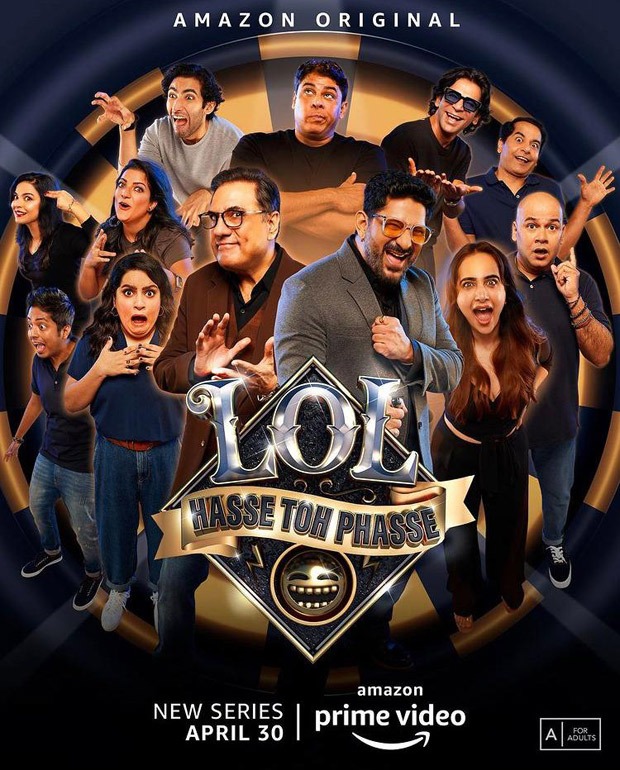 The show pits ten professional comedians against each other for six consecutive hours with two goals: to make others in the house laugh and above all to make sure they don’t laugh or even smile. The last competitor to stay candid will be the winner and take home a grand prize. India’s top comedy artists Cyrus Broacha, Sunil Grover, Suresh Menon, Gaurav Gera, Kusha Kapila, Mallika Dua, Ankita Shrivastav, Aakash Gupta, Aditi Mittal, Aadar Malik make up the incredible line-up of contestants who will be under the constant surveillance of the hosts Boman Irani and Arshad Warsi.

James Farrell, Head of Local Originals, Amazon Studios said, “LOL: Last One Laughing is a successful format that we at Amazon Studios are extremely proud of. Originally developed in Japan, the show has been adapted in countries like Australia, Mexico, Germany, Canada and Italy where it’s done extremely well. India was an obvious choice as the next country to launch this show. Our Indian audiences love humorous content and we are sure they will enjoy LOL: Hasse Toh Phasse. “

Speaking about the latest Amazon Original series, Aparna Purohit, Head of India Originals, Amazon Prime Video, India, added, “What could be more relaxing than a warm laugh? Comedy is one of the most viewed genres on Amazon Prime Video. We are excited to present LOL- Hasse Toh Phasse, an Amazon Studios format to Indian audiences. In addition to an illustrious lineup of some of India’s most popular comedians as nominees, the team at Amazon Studios is very excited to have the inimitable duo Boman Irani and Arshad Warsi on board in as referees and facilitators. Unique, fresh, and filled with funnies, this one-of-a-kind laughter survival show is infused with all the right ingredients and promises to be a full laugh riot.

Famous film actor Boman Irani, who plays the show’s co-host, said, “I love to explore and experiment with various concepts as much as I can, and I’m delighted that with LOL- Hasse Toh Phasse, I could be part of a show that features comedy in a fresh new avatar. Indian audiences love comedy, and with a very unique format featuring ten of India’s most hilarious comedians, this show is packed with absolute madness, laughter and fun. It’s always fun working with Arshad and I can’t wait to experience all the madness alongside him.

Arshad Warsi steps into the hot seat of a host and referees alongside his dear friend Boman Irani saying: Munna Bhai MBBS, Lage Raho Munna Bhai or Jolly LLB, I really enjoyed working with Boman and am delighted to be collaborating with him again for LOL-Hasse Toh Phasse. Boman and I are tasked with keeping a close eye on the ten candidates who will come under one roof with one intention – to be the last to laugh. I can’t wait to see what these talented actors come up with and how far they’ll go to win the award. I’m sure audiences will love this original format that Amazon Prime Video brings to India after its success in Europe, South America, and other Asian countries.