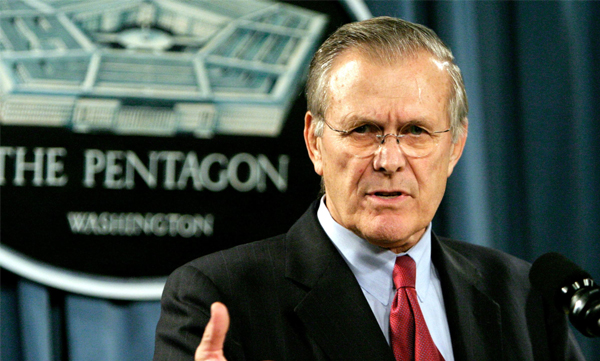 Washington: Former Secretary of Defense Donald Rumsfeld, who led the United States to the wars in Iraq and Afghanistan, has died at the age of 88. George W.. Bush served as president and Rumsfeld as secretary of defense. The army conquered Afghanistan and Iraq.

Even as millions took to the streets against the Iraqi occupation, Rumsfeld and Vice President Dick Chini, described by the Bush administration as a “war on terror,” were not shaken. Rumsfeld was also criticized for the infamous Guantanamo and Abu Ghraib concentration camps. Abu Ghraib prisoners of war have been brutally tortured by Iraqi prisoners of war. The U.S. sent Rumsfeld to Afghanistan after the September 11, 2001 terrorist attacks. At the time of his death, the army had not completely withdrawn from there.

Rumsfeld, who remained active in the public sphere after leaving office in 2006, died in Tavas, New Mexico. Former President Bush recalled that Rumsfeld was a unique public servant.

On September 11, 2001, Al Qaeda terrorists stormed the World Trade Center and the U.S. Rumsfeld was also at the Pentagon when the plane crashed. The following month, the U.S. Troops arrive in Afghanistan. When the Taliban regime was overthrown in December 2001, Rumsfeld was hailed as a US war hero. However, the subsequent invasion of Iraq gave him a bad reputation.

U.S. The decision to send troops to Iraq was rejected by even the Joint Chiefs of Staff. Born in Chicago, Rumsfeld was a young wrestler and football player during his college years. Prior to being elected a member of Congress at the age of 30, he was a pilot and naval flight instructor. U.S. Illinois was represented in Congress.