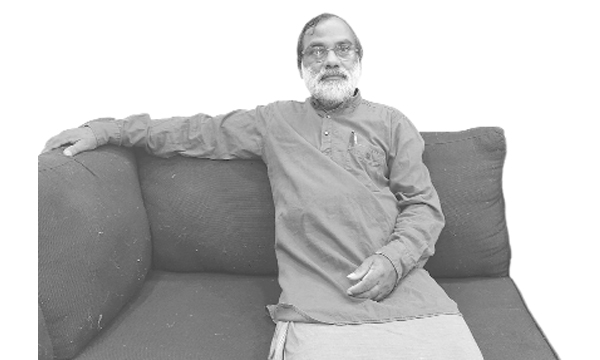 Cheramangalam Chamunni, a native of Palakkad, is an artist with over forty years of experience in the field of drama. Drama is like a breath of fresh air to Chamunni. It is no exaggeration to say that he lives for drama. Unable to get college education due to adverse circumstances. But I gained a lot of knowledge from the world of drama. He has experimented extensively with solo plays, five-minute plays, and bus stop plays. It was an unforgettable experience to be able to act with KPAC Lalitha when Basheer’s Walls was dramatized.

Although he has worked as a newspaper agent for four decades, he has traveled all over India out of that limitation. At a very young age, I had an unquenchable passion for Sri Buddha and Buddhist philosophy. Being able to visit Buddhagaya is considered to be the greatest blessing in life. Even though the eldest son was named Gautama, his passion was unquenchable. The second son was named Siddharth. Chamunni’s eldest son, a leftist, is getting married to a girl named Sonia from a Congress family! It was named out of respect for Sonia Gandhi. Chamunni’s second son is also married to a Congress family. His wife’s brothers’ names are Rajiv and Rahul. But Chamunni’s family also has an internationally renowned name. Yes, the Gautam-Sonia couple’s name is Malala!

Chamunni, who stopped distributing newspapers due to health issues, now has only a pension for his artists as his only source of income. Chamunni, who has devoted her life to drama, has only one desire to act until she dies. Must die while acting.

Chamunni opens his mind on the occasion of World Drama Day.

The first step to the stage was when I was in fifth grade. In 1966, he became a narrator.

Beyond the mammoths, emerald silk

There is a country called Malayalam. Small –

There is a country called Malayalam

Fighting is one of the oldest and most popular folk, drama, dance and music forms in the Palakkad district. The government recognized this art form by giving the Palanthoni Velayudhanasan Award, which was the hope of the fighting game. Subrahmanyan, the son of Velayudhanasan, introduced me to the art world. Later we established the Jaya Kairali Library at Cheramangalam. Annual annual celebration and drama presentation. He has acted in more than 200 plays, including his own.

When did you start writing plays?

A play by C.L. Jose appeared in a children’s magazine. There are hundreds of plays that have been performed in front of theatrical performances by rural art societies and professional theater. The most influential are professional plays. The works of so many great men. Even more so is the stage reign of acting patriarchs. I, the playwright, who gave body, body, mind, bones, flesh and blood.

What was the inspiration for the play?

I do not have the skill to get close to someone suddenly. Probably the one I talked to the most was myself. I will ask myself questions. I will find the answer myself. It may be that this style of weaving and cultivating myself and others has caused me to spread into the theatrical world.

The 50th anniversary of Nemmara Govt. Boys’ High School was when I was studying in the ninth standard. I also took part in a group dance during the festivities. It was on that day that the great poets Vyloppilly Sreedharan Menon and P. Kunhiraman Nair were seen up close. Untouched. Later, when Vyloppilly’s saptathi celebration was held in Palakkad district, he spent a night with the poet. The poet spoke about my poem – Gopala Palakan – which I presented at the Poetry Conference. It was my duty to accompany the poet to his home. The poet bought only fifty rupees and went back on his own. The study also stopped with the failure of the 10th class. Then the textbook was life. It was only after 1973 that the flames of book reading ignited and writing began.

What is the reason for the influence of Buddhist philosophy?

I have no idea when or where I was attracted to Buddhist philosophy. I still keep the letter intact, with a mind that is careful to tell only the truth and not to lie. The principles of Panchasila are still fresh inside.

An unforgettable experience in the world of drama?

All India Radio’s Thrissur station aired the play ‘Sangam Saranam’. Later he went to All India Radio. M. Achuthan Kutty Sara was the program director. He also provided the voice for a character. I introduced myself. He looked at me in disbelief. The time it took him to realize that I was Cheramangalam Chamunni has stuck in my memory for a long time. Going to the audition test on All India Radio and failing has not been forgotten. Some of the words I read that day are memorized. Mridu Mridanga Dhwani, Ghatolkachathyam, two verses. Conversations in the play.

What about the reunion of families with different political perspectives?

Different political views have not affected family life. They also melt in the flow.

What about the future of drama on Drama Day?

There will be no further decline or weakening of the future of the play. One of my observations is that if the old playwrights had dedicated themselves to the play, the new playwrights firmly believe that the play must have survived the play. The playwrights began to play the play in front of an audience of twenty or thirty. Let the interior and exterior of the country blow into the minds of the public. That is a good sign. If the play has portraits of the life struggles of those who have seen the play, the audience will also be with the play. The grandeur and grandeur of the play were not destroyed. Of course.